With hardware like Garmin's GSR 56, you can finally enjoy the safety-enhancing benefits of datalink weather when operating worldwide. Weather data is requested on demand using the GSR 56 satellite link. Weather data includes Meteorological Aviation Reports (METARs) that provide current temperature, dew point, precipitation, wind speed and more, as well as Terminal Aerodrome Forecasts (TAFs) that show predicted weather for up to 30 hours in advance. Throughout most of Europe, Canada, Australia, and the U.S., the GSR 56 can also receive high-resolution radar imagery, which displays in full color on the G1000 and G600/G500/G500H series of displays. Additional coverage is planned for satellite, radar and lightning data. Check back for updates. Subscription to Iridium satellite data service through Garmin is required. Monthly and per-use charges apply.

RADAR echoes from sites across the US, Canada, Australia and Western Europe are combined into a single display. Post processing of the radar imagery is done to remove most false returns due to atmospheric anomalies and ground clutter while also color coding the precipitation based on the type expected at ground level. Rain colors range from light green to yellow and finally red for the most intense echoes. Snow is indicated by white and mixed precipitation is pink. In Canada, Australia, and Western Europe, radar returns from the lowest usable antenna angle are displayed. In the United States, the most intense radar echoes observed at any tilt of the radar are shown for any given location. Areas of weak or no radar coverage are colored purple.

Coverage maps show the maximum area data is provided for. Actual coverage may vary from one image to another. Click on map for larger view.

Clouds are detected by the infrared radiation they emit. This allows the satellite to track clouds at night. Darker grey clouds tend to be warmer and therefore, lower in the atmosphere. Brighter shades of white indicate colder, taller cloud tops. Because low clouds and fog often have temperatures close to the surface air temperature, it can be difficult to determine the exact line between clear and cloudy skies.

Coverage map shows the maximum area data is provided for. Actual coverage may vary from one image to another.

Cloud-to-ground and cloud-to-cloud lightning strikes are plotted on a grid. This data should not be interpreted as the exact location of a lightning strike. It is intended to show that lightning is in the general area represented on the display.

Terminal Aerodrome Forecasts (TAFs) are generated for select airports by human forecasters. They usually include forecasts for visibility, ceilings and precipitation. Worldwide coverage.

AIRMETs are advisories similar to SIGMETs but are for less severe conditions. Worldwide coverage.

Estimated speed and direction of winds based on computer model forecasts for various levels of the atmosphere. Worldwide coverage. 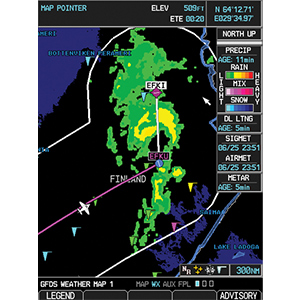 You can sign up for Connext Worldwide Weather by completing the Connext Satellite Services application.